The Return of Evander Holyfield and Mike Tyson 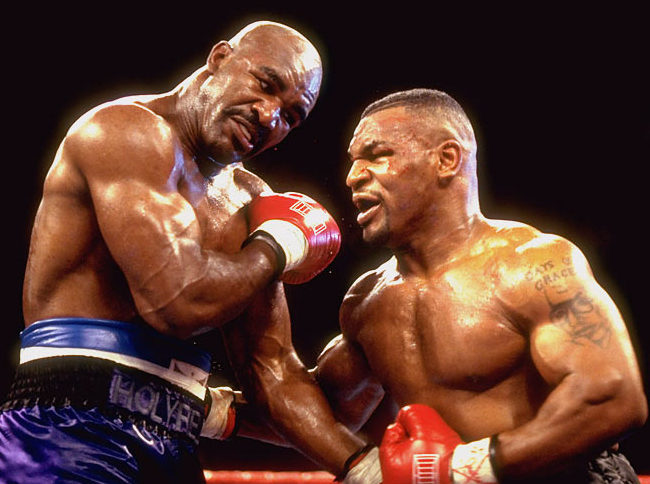 In recent weeks, both Evander Holyfield and Mike Tyson have announced their intention to return to the boxing ring. This will be for charity, rather than competitive action, although being two of the greatest boxers of all time, and two very competitive individuals, this is sure to be far more than your normal average charity boxing match.

Why Return to the Ring?

Only Holyfield has spoken properly about his return, and he has said that this is all for charity. He will return to the ring for a series of exhibition bouts that will all raise money for good causes. Tyson has also said that charity will be the main focus of his return, but hasn’t given any more details that that.

Holyfield retired from action in 2001, while Tyson boxed for a further four years and retired in 2005. Should they return this year, the two men would be aged 110 combined, but regardless of that, and even if they don’t fight each other, this would attract huge interest.

What Happened When Holyfield Met Tyson?

Evander Holyfield and Mike Tyson are regarded as two of the greatest boxers to ever grace the sport. They fought twice, back in 1996 & 1997, with Holyfield coming out on top in both fights. The second of those was the famous fight that the referee stopped after Mike Tyson bit off the ear of Evander Holyfield.

Will the Pair Meet Again?

Nothing has been said regarding a third bout between these two of any description. The only facts surrounding the situation are that both have announced a return to fight in exhibition matches for charity. They both announced their return at similar times, and could be working towards doing something together.

If that did happen, interest in the event would be huge, so if the two want to work together and earn some serious money for charity then this is the way to do it. Interest will come from all over the world, with people looking to not only watch the event but also side with their favourite to win it. Sites such as those on the UK new betting sites list will no doubt price up the event and allow people to place a wager on it, if something gets announced in the near future.

What Charities are Involved?

Holyfield has been more open about his return, the reason for it and what he is working towards than Tyson, so we know a lot more from his side of things. He will return to fight for charity, with his chosen charity being Unite4OurFight.

This is a charity that supports projects that deal with learning and emotional development. Right now, this is specifically being aimed at children who are suffering because of the Coronavirus pandemic.

Tyson has confirmed that his return will also be for charity, although he has given no more details so we don’t know if he’s working with Holyfield, for the same charity, or for something completely different.