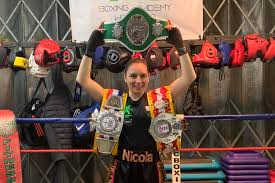 Hurricane Nicola has officially touched down in the United Kingdom.

Six years ago, Nicola Hopewell walked into a local boxing gym to get into phenomenal shape.

But instead of a once or twice a week type of dedication, Hopewell, the first female boxer from the town of Worksop, located 19 miles southeast of Sheffield, developed a severe appetency for the sweet science.

"I fell in love with the sport very quickly," Hopewell told The Ring. "I eventually started sparring and wanted to compete at the amateur level."

As her skills improved, Hopewell earned her nickname of "Hurricane."

"My friend watched me box and she described my shots as rapid," she explained. "She said I was quick and I punched as fast as a storm."

Hopewell introduced Anita Addy and Tasha Boyes to her squalls of heavy leather earlier this year, as she scored a pair of knockouts to open up her professional career.

However, Hopewell's efforts to secure her third bout have been more challenging than any of her fights thus far.

The 112-pound prospect was due to face bantamweight Tasha Boyes (0-1) on November 21. But the fight was canceled when Prime Minister Boris Johnson announced a four-week national lockdown to help slow the spread of COVID-19 in late October.

"This is the second time I have had a fight get canceled due to COVID-19, so it is very frustrating," Hopewell admitted.

"It is particularly frustrating because I had a full camp and there is a lot of uncertainty as to when I will be able to fight again."

The second national lockdown in England comes as the nation recorded an additional 21,915 confirmed cases of the virus on Saturday, bringing their total to just over one million cases.

While Hopewell is frustrated, she remains upbeat about the chances of the world eventually conquering COVID-19.

"I don't think the virus is going to away completely any time soon," she added. "But I feel like the vaccine is going to make a huge difference.

"The most important thing is ensuring that the public is safe. From a boxing standpoint, the fans deserve to see good fights."

Hopewell, who also works a full-time job, trains at Boyle's Pro Boxing in Worksop with head trainer Chris Boyle, whom she credits for her early development.

"He has helped me improve continuously from the very beginning," Hopewell said. "Each fight, we break it down and find something to work and improve on.

"That's the only way to get better. He is always there for me and wanting the best for all of his boxers."

While her career is just getting started, Hopewell is hopeful that she will get a significant opportunity within the next year.

"I don't want to wait a whole year to get a big fight," she continued. "In women's boxing, there are less fighters, so there's a chance I can get to a title shot faster."

When asked what has been her favorite moment as a boxer to date, Hopewell said it was sparring her boxing idol Nicola Adams, who captured two Olympic gold medals and won a title in a pro career that was cut short due to injury.

"I was initially starstruck when I met Nicola," Hopewell revealed. "My other role model is (undisputed lightweight world champion) Katie Taylor.

"Like Nicola and Katie did for me, I want to inspire young girls to box as well."