What’s next for Terence Crawford? 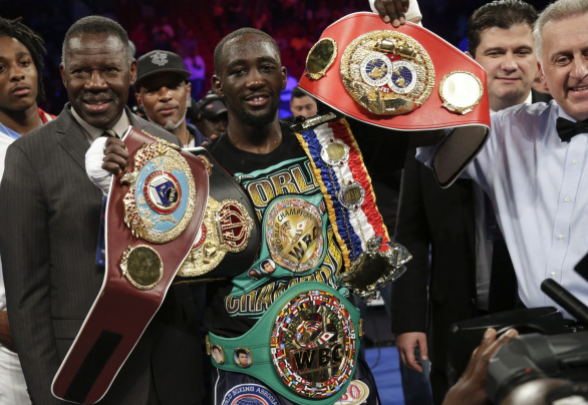 Terence Crawford, who is one of the best boxers of our time, finds himself in a difficult situation. Meta.reviews tell about the undefeated athlete and the choice he has to make.

Undefeated Terence Crawford is 33 years old and his boxing stats are 37-0 (28 knockout wins). He was born in Omaha, a city of half a million people in the middle of the United States.

Terence’s professional boxing career started back in 2008 with lightweight appearances. At the moment he is the welterweight champion.

ESPN considers him the best boxer in the world regardless of weight classes (followed by Saul Alvarez, Naoya Inoue, and Errol Spence). The Ring ranks Crawford third after Alvarez and Inoue. Boxrec, a statistical resource, puts him in fifth place.

Among the top 20 boxers in the world, Crawford stands out with the most wins and no losses. In 2017, Terence became the first boxer in 12 years to collect four championship belts.

Will he become the new Mayweather?

By the age of 33, the legendary Floyd Mayweather had only three more wins (40-0) than Crawford. But his last five opponents were Marquez, Hatton, De La Hoya, Baldomir, and Judah. Crawford, on the other hand, beat Brook, Kavaliauskas, Khan, Benavidez, and Horn in his last five fights. Crawford’s published prices for these fights range from $3 million to $5 million. Floyd at this same point in his career had already started earning tens of millions. For example, he received $25 million for Marquez and about the same for De La Hoya.

What is the problem?

At the moment Crawford looks like a perfect fighter, but only in fights against strong opponents in his weight class will it be possible to make sure of that.

As mentioned, Boxrec does not rank Crawford at the top, despite his impressive results. The number one is 30-year old Errol Spence, with 26 wins in 26 fights (21 KOs).

It seems logical to fight these two boxers. But the thing is that Spence and Crawford have different promoters, who are on different TV channels. Terence’s promoter is Bob Arum from Top Rank, who works with ESPN, and Spence is handled by Al Haymon, who works with the rival channel Showtime. Thus, Crawford was held hostage to the intrigues of the fight organizers.

Even relatives are stepping in out of desperation. Terence’s sister wrote a comment under one of Spence’s posts on social media. She demanded that he fight her brother.

So what should Crawford do?

Terence Crawford calls Manny Pacquiao, whom Mayweather once fought, as one of his coveted rivals. But so far there is no exact agreement on this fight, although Bob Arum is working hard to make it happen.

Now Crawford is at a crossroads. He has a choice to make whether he leaves Arum for Haymon as soon as possible (this option seems the most logical) or waits for the fight with Pacquiao.

All the best boxers have been performing on other TV channels for a long time and collaborating with other promoters. Everyone understands that Terence will not last long in the top three boxers in fights with the underdogs. Considering that the talk about the fight with Spence, like a few years ago, remains only talk, Crawford will have to decide something this season. Time will tell what he will choose.