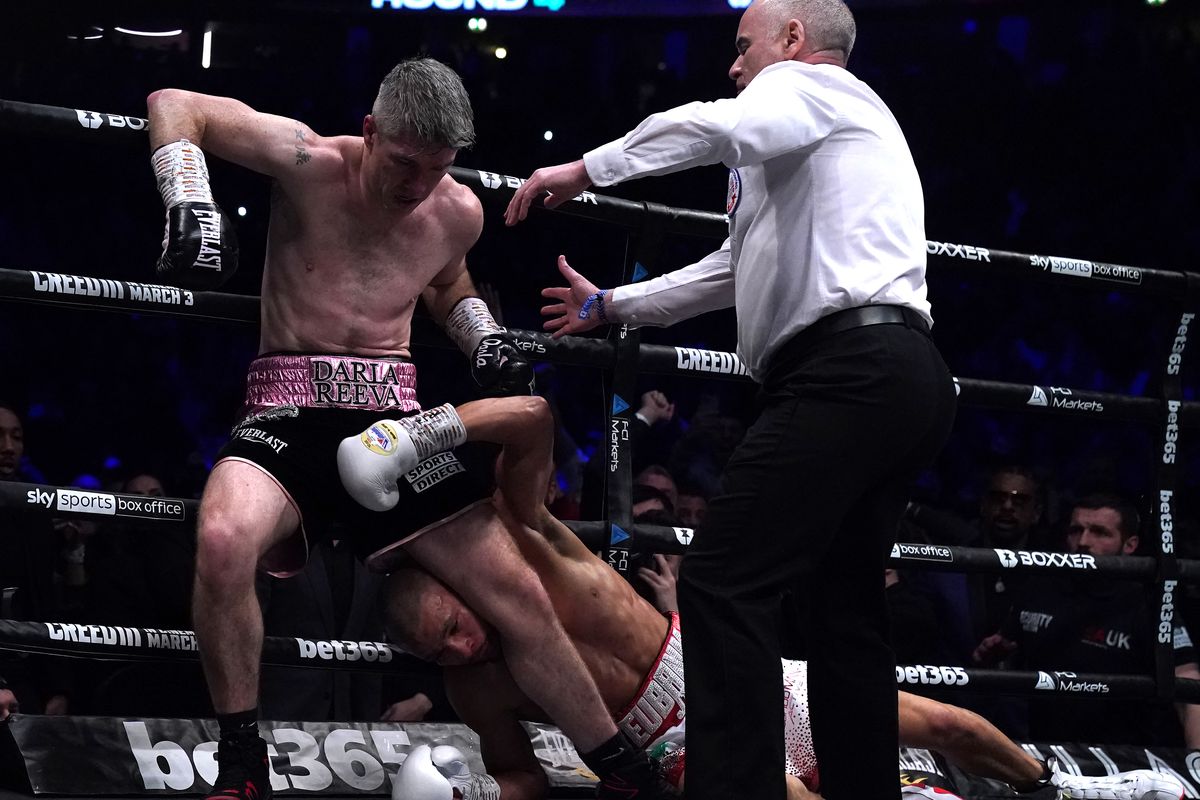 Liam Smith was quietly one of boxing’s most active fighters. On Saturday, his hard work culminated in an upset victory.

The former junior middleweight titleholder knocked out Chris Eubank Jr. in the fourth round of their grudge match in Manchester.

Eubank had appeared to control the first three rounds, but Smith came forward and dropped him flat on his back with a series of left hooks. While Eubank was allowed to fight on, Smith floored him again moments later to secure the highest-profile win of his career.

The build-up had become increasingly tense, culminating in a press conference on Thursday where Smith publicly questioned Eubank’s sexuality, which led to accusations of homophobia.

But there were no signs of tension after the fight when Eubank congratulated his bitter rival.

“I don’t know if it was one shot or an accumulation, but as I have said all week, a lot was made of that he has a great chin, I’ve got a great chin, but there are many fighters with better chins who have been knocked out in the past,” Smith said.

“He has got very long arms and he is very good at jabbing and pulling away. I thought going in that I would have judge the distance better as the fight went on, but I am known as a slow starter. But slow starter or not.

“I can’t remember [the sequence]. I knew I wobbled him so I let them go. I knew Chris was hurt so I thought ‘I cannot let him off the hook’. His fitness and condition would probably make him recover quick. But the next bundle of punches landed. I’ve got good accuracy, my timing’s very good.”

In the early moments, Eubank looked to establish his jab, but Smith stayed close and within range to land his counter right. Both fighters exchanged hard right hands to end an entertaining opening round.

Early in the second, the pair exchanged again, but Smith again landed a counter right. Eubank attempted to re-establish the jab, but Smith continued to push forward and catch Eubank with solid flurries.

The third saw Eubank land a strong uppercut as Smith tried to come forward. He followed up with more uppercuts and a right hook but Smith took them well.

But Eubank’s confidence ended up costing him. He stopped throwing the jab with intensity and backed himself into a corner. Smith accepted the invitation and unloaded with both hands, finishing with two lefts that dropped Eubank on his back.

Eubank rose to his feet with help from the ropes, but was badly hurt and on unsteady legs. Referee Victor Loughlin allowed the fight to continue as Smith prematurely celebrated his victory. Moments later, he decked Eubank again and Loughlin waved it off.

Eubank has a rematch clause and suggested he will exercise it.

“If Chris wants the rematch he can have one, but it is going to be on my terms,” Smith said.

“Big congratulations to him,” Eubank said. “I felt like I had him going but he caught me with a great shot. If the fans want to see a rematch, we can get it on at Anfield.”

Whether it's another fight with Eubank or a major opportunity, Smith is ready for what's next.

“I agreed to a rematch clause, so that is down to Chris and Chris’s team, but if not, we move on. I’m in a very good position now at 160 and 154, so I think over the next month or two we have got big decisions to make.”