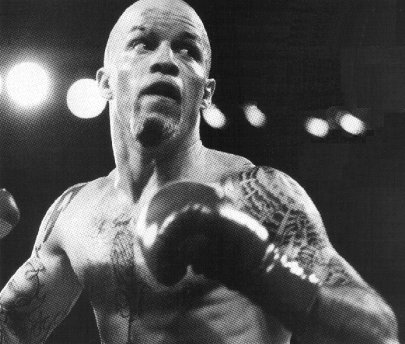 Back in the mid-90s, boxing was at one of its peaks in terms of attention, worldwide. One of the big stars at that time was Angel Manfredy. The man known as El Diablo fought mostly at 130 and 135 weight divisions and was one of the most exciting fighters of that time. I was able to recently sit down with Manfredy and go over some of the peaks and valleys of his career, along with some of the things he is doing now.

Question: What are your feelings on the state of boxing right now?

Question: Who are some of the guys you like to watch now?

Manfredy: I beat the best, and the best, and the name fighter in the 90s, was Arturo Gatti. He was the man and I was coming up as El Diablo, the Devil. I was making noise. I called him out and thankfully he gave me the opportunity to fight me at 130, but little did he know I couldn’t make 130, just like he couldn’t make 130 and when they made it 135 I said Jesus, thank god. I didn't care about the money. It was about legacy. It was about the win. It was about fighting the best fighter and taking his place as being the best pound for pound fighter in the world and I did that in 1998.

Question: What was it like fighting Floyd Mayweather Jr?

Manfredy: You know what? I really didn't know nothing about the guy. When Lou DiBella talked to me at the time I said cool, I'll fight anybody. Lou said Floyd and I said who the hell is that? I'll fight him. I didn’t know who he was. I didn’t look at tapes or make a training camp. All I knew was that he was a boxer and he runs. That was exactly what he did in the 1st round, run.

He did catch me in the 2nd round with a right hand. More speed than anything. It shocked me and the 1st thing I said to myself was keep your hands up. He attacked me and kept on throwing punches and he landed like 3 and they stopped the fight. I couldn’t believe it. I cussed the referee out. It was a premature stoppage, but you know what? He got the victory and that’s all that matters.

Question: Did you ever ask for a rematch with Floyd?

Manfredy: After that fight, I went back up to 135 and got the highest rating on HBO at the time when I beat Ivan Robinson. They asked who I wanted to fight and I said Floyd, bring on Mayweather. He would not take it. He would not fight me. He didn’t want nothing to do with me. I mean if it was about the money, back then he wasn’t “Money Mayweather” yet, he was “Pretty Boy Floyd”, but he was still arrogant then. Back then I made a million a fight. I got 3 separate checks, a signing bonus, a fight check, and a 3rd check. So, he probably was thinking I was making 400k, but I was making more than him.

Question: What made you change your lifestyle, personality, and outlook on life?

Manfredy: Well, it all happened after the Stevie Johnson fight. After the Stevie Johnson fight, I made close to a million for that fight and I went to the Oscar De la Hoya vs. Felix Trinidad fight. That same day, I had a party at my house, I bet 5000 on Trinidad and as you know he won, but he really didn't, but I won 5 grand. After the party, everyone went home and me and my wife partied for 3 days. No sleep, no water, no food, just cocaine and it went on for 3 days.

I was in my bedroom and she was downstairs in the kitchen. I'm on my knees, with no water, food, or sleep for 3 days, and I hear a voice come into the room. The voice said, "It's time", I said "Time for what?", the voice said, "It's time to take your life". I had a 45 in my closet and contemplated taking my life. Then I hear my dad when I was a little kid when he used to come home drunk, calling me stupid and dumb and saying you're never going to be nothing. I hear teachers calling me stupid and how dumb I was, that I was never going to be nothing, that I was never going to accomplish nothing.

The voice said I had a choice at that moment to give my life or take my life. I had to choose that day who I was going to serve and I chose Jesus. My wife came running through the door saying she heard a gunshot and I didn't even have the gun in my hand, it was still in the closet. From that day, we both started serving the lord and my whole life changed. I couldn't read back then. The 1st book I read was the bible. I can read very well now. I'm a teacher of the gospel, a soul winner for the keeper of god.

Question: Can you tell us about some of the charities you're working with.

Manfredy: I work with Women in Bloom, it’s a non-profit charity for battered women who was to use boxing for conditioning, fitness, and technique while helping the mind.

Question: Can you tell us about this documentary and movie deal you mentioned to me.

Manfredy: I'm talking with HBO about doing my documentary. I will give more details when the time comes around. And then just last week, I got a call and they said they wanted to do a movie on my life.

I fought 7-8 world champions, did not matter. I beat the best and I lost to the best, but I never gave up, I never quit, and I never stopped fighting till 04, when I retired in the ring. I always gave people what they wanted to see.

Question: You said you plan to start writing a book? Can you give us a little preview about that?

Manfredy: I'm starting to write a book on the 24th of August. The best thing about it is the book will start October 30th, 1974. I was born that day and it was the same day as the greatest fight of all-time, Muhammad Ali vs George Foreman, Rumble in the Jungle. The book will start off with that fight.

I think people will be excited to see my story and how I changed. I've went through a million dollars in a year, just partying. I used to live paycheck to paycheck. By the time my next fight came along, I'd be already broke. That old person is dead. I'm a father. I'm a husband. I'm a new man now.

Question: What are some of the other things you are doing now?

Manfredy: I’m starting my own gym, the Angel Manfredy Sports Boxing MMA gym. It’s not only a gym, it’s also a rehab center, a place where kids can be tutored. Kids can bring schoolwork to the gym. They can't workout unless they do their homework 1st and they got to be above a C average.

Manfredy also trains half dozen fighters at Carr Boxing Gym in Crown Point Indiana and has been a matchmaker for 9 fighters, including 2 heavyweights, for Team Certified Sports in Milwaukee. My final question to him got a surprise answer, but it shows what Angel Manfredy is all about and lets you know what type of a person he is and how much making a difference means to him with helping people.

Question: What message do you have for you fans? And how can they reach you?

Yes, Angel Manfredy still does the walking and talking, but he’s all about doing it and spreading the word. That is something plans to die doing.