Monaghan Squeezed As Stevenson-Fonfara II On For June 3 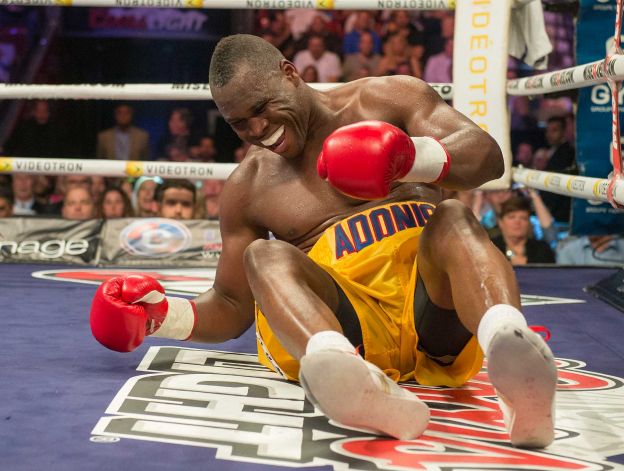 A notable omission from the upcoming schedule of the freshly renovated Nassau Coliseum was any mention of boxing-related events to take place at the state-of-the-art Long Island venue.

The reigning World light heavyweight champion was believed to headline a springtime card at Nassau Coliseum versus unbeaten local favorite Sean Monaghan. Instead, Stevenson followed suit in what has become a pathetic title reign that lowers in credibility the longer it lasts, as he confirmed plans for a rematch with Andrzej Fonfara on June 3 at a location to be determined in Canada.

"It's now official, on June 3rd rematch against Andrzej Fonfara in [C]anada," Stevenson announced Saturday morning through his verified social media account. "The undercard will be interesting as well."

The suggestion from the defending champ was that the bout would air live on Showtime, although the American cable outlet has yet to make an official announcement or even comment on the record.

Stevenson was pushed to the brink by Fonfara in their first clash in May '14, which marked the Haitian-Canadian's debut on Showtime following a brief stint on HBO. His transfer in networks came at a time when he was being steered toward a massive unification clash with then-unbeaten titlist Sergey Kovalev, a bout he sabotaged by signing with adviser Al Haymon whose clientele was functionally banned from appearing on HBO at the time.

The bout with Fonfara proved to be an entertaining affair, but an unwarranted matchup at the time it was announced. The same holds true heading into the potential rematch, which will mark the eighth title defense for Stevenson in a reign dating back to his 1st round knockout of Chad Dawson in June '13.

Fonfara (29-4, 17KOs) is 4-1 since their May '14 meet, including a shockingly one-sided knockout win over Julio Cesar Chavez Jr. in April '15, followed up by his Fight of the Year contender 12-round war with Nathan Cleverly later that October, winning a unanimous decision in their unforgettable punchathon.

The past year wasn't nearly as kind, as Fonfara was stretched in one round by Joe Smith Jr., another Long Island-bred light heavyweight who was angling for a showdown with Stevenson. That bout never managed to get past early discussion, as Stevenson moved on to talks with Monaghan, who let his contract with Top Rank expire and signed with Lou DiBella in hopes of finalizing terms for his first title shot. The move made sense as DiBella is part of the Premier Boxing Champions universe that also houses Stevenson and his promoter, Yvon Michel.

Somewhere along the way, however, talks went from nearly done to vanishing into thin air.

"Well it seems I got jerked again," Monaghan (28-0, 17KOs) stated through his social media account. "[The f]ight with Stevenson is off."

Fonfara "earned" his second title opportunity with a bounce back knockout win this past April. The Chicago-based veteran scored a 10th round stoppage over Dawson who seems to be the PBC's measuring stick for who deserves a shot at Stevenson these days. It was all that was required of Tommy Karpency, who outpointed the former champ in Oct. '14 and was granted a shot at Stevenson. He proved to be one of the worst title challengers in modern history, outmatched from jump in suffering a 3rd round knockout before being dispatched back to the club circuit.

Sadly, Stevenson enters the potential rematch with Fonfara coming off of one of his better wins in recent memory. The 39-year old southpaw was made to look brilliant in scoring a 4th round knockout of second-generation boxer Thomas Williams Jr. in their Fox-televised shootout last July. It was his lone bout of the year, with the rest of his time spent largely on Instagram and other social media outlets claiming to want the very best - only to settle for what has comprised of a title reign that has rapidly become the running joke of the boxing industry.

It can hardly be argued that Monaghan is at the top of any challenger's queue - but facing a popular Long Island boxer in the first boxing event at Nassau Coliseum since the 1980s made all of the commercial sense in the world.

Then again, when does anything in boxing ever make sense?

"I honestly always kinda doubted it was gonna happen," admits Monaghan, who remains idle since a tune-up win last December. "Was he gonna fight an undefeated guy, no, he fights a guy he beat already who just got KOd in one round!?!

"No wonder nobody respects this punk motherf***er. Whoever I get next is in [t]rouble."

"I honestly always kinda doubted it was gonna happen. Was he gonna fight an undefeated guy, no, he fights a guy he beat already who just got KOd in one round!?! No wonder nobody respects this punk MFer. Whoever I get next is in Trouble