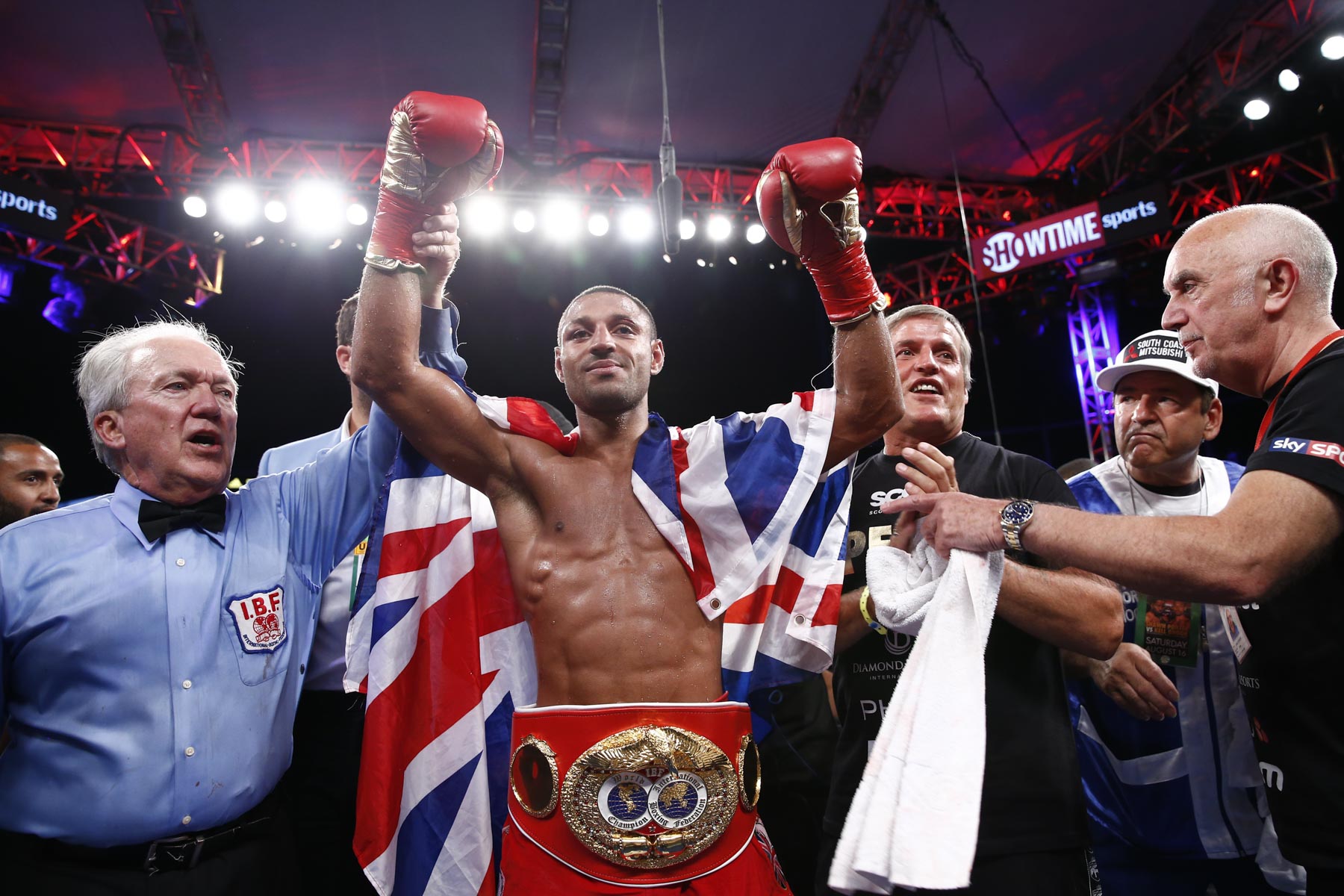 Turns out, it was Showtime ... for "The Special One," Kell Brook.

In a minor upset, Britain's Kell Brook (33-0, 22 KOs), of Sheffield, England, won a battle of undefeated welterweights and the IBF world title with a majority 12-round decision over defending champion "Showtime" Shawn Porter (24-1-1, 15 KOs), of Cleveland, Ohio, Saturday on SHOWTIME from StubHub Center in Carson, Calif.

Unbeaten Anthony "The Dog'' Dirrell (27-0-1, 22 KOs), of Flint, Mich., became the second cancer survivor and 55th alum of ShoBox: The New Generation to capture a world title when he out-mauled, out-brawled and unanimously outpointed defending champion Sakio "The Scorpion" Bika (32-5-3, 21 KOs), of Sydney, Australia, to take the WBC Super Middleweight World Title in a grudge rematch.

For Brook, this opportunity at a world title was a long time coming. Three times he was scheduled to challenge then-IBF welterweight world champion Devon Alexander and three times a fight was cancelled due to injuries to both boxers.

Injury-free, confident and determined to make the most of his shot on Saturday, Brook fought perhaps the fight of his life.

"You can tell how much it means to me by my reaction,'' said Brook, who was cut over the left eye in the second round. "I've been dreaming about this moment since I was nine-years old. It's unbelievable.

"I was scrappy tonight, and not as slick as I wanted to be. But I'm the world champion now, baby. I was born to do this.

"I'm ready for a mega, mega fight next. I'll take on Keith Thurman or Floyd Mayweather. Amir Khan should get in queue now. I'm the world champion now so they're all going to want to fight me."

Porter, a former U.S. amateur standout, thought he had done enough to win his second title defense despite getting cut over his right eye in the sixth.

"I think I'm still the champion,'' he said. "I'm 24-1 and Team Porter will be back to the drawing board. There are no excuses. I do want the rematch."

Dirrell won by the scores of 117-110, 116-111, 114-113 in a fight that, like almost every Bika fight, featured lots of takedowns, elbows, low blows, holding but mostly lots of scolding from referee Jack Reis. The fighters, particularly Bika, were warned repeatedly for illegal tactics. Reis finally deducted a point from Bika for a low blow in the eighth.

Like Brook, Dirrell was overcome by emotion and cried in the ring.

"This journey has been amazing and I can't even fathom it,'' Dirrell told SHOWTIME's Jim Gray afterward. "I already overcame the biggest fight of my life by beating cancer. I can't see anything being bigger than this. I was never close to giving up. I stuck to it and now I'm WBC world champion.”

Figueroa, making his first title defense, was leading a fast-paced slugfest by the scores of 80-72 and 79-73 twice entering the 10th. But it was hardly a blowout. At the end of a flurry of thrilling action at the end of the third round, SHOWTIME's Mauro Ranallo said, "Tremendous action. Yes, this is a record,at the StubHub!"

Early in the 10th, Figueroa landed a hard right hand that dropped Estrada. The challenger made it to his feet, but was defenseless as Figueroa continued to flail away with both hands. The referee rescued Estrada at the one-minute mark of the round.

"I don't think I did that great and obviously felt I could be more explosive and maybe get him out of there earlier,'' said Figueroa, who suffered a bad cut above his left eye from an unintentional headbutt in the ninth. "I was a little concerned that the referee or doctor would stop the fight because of the cut. I knew Estrada would be open for the right hand. I was playing a little possum when I caught him.''

As for the immediate future, Figueroa sounded like a boxer ready to move up a weight class. "I'm not 100 percent positive I am going to stay at 135 pounds,'' he said. "I'm sure my body would be more comfortable fighting at 140. But if the money is right, I would defend again at 135.''

Estrada, who had a nine-fight winning streak end despite outpunching Figueroa, 557-510, was classy and appreciative afterward.

Earlier on SHOWTIME EXTREME, undefeated heavyweight knockout sensation and No. 1-ranked WBC contender Deontay "The Bronze Bomber" Wilder of Tuscaloosa, Ala., improved to 32-0 with 32 knockouts with a fourth-round TKO over Jason Gavern (25-17-4, 11 KOs), of Orlando, Fla.

"I'm ready for that world title fight. I want the WBC champ Bermane Stiverne next, hopefully in late November.''