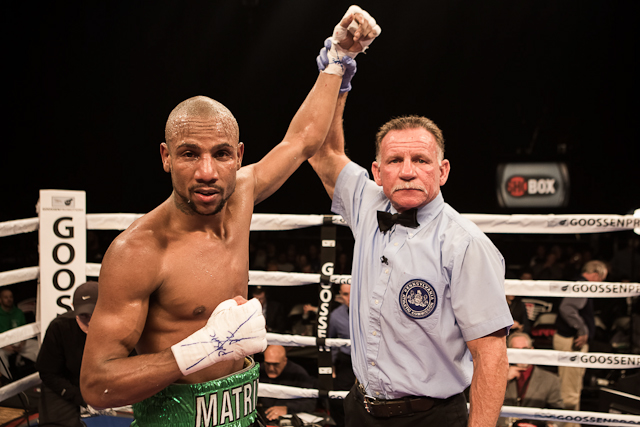 Floyd Mayweather Jr. was always going to celebrate his 40th birthday this Friday - only now he will be doing so without the backdrop of a major title fight.

The on-again, off-again featherweight title clash between secondary beltholder Carlos Zambrano and mandatory challenger Claudio Marrero was due to headline the February 24 edition of Showtime's ShoBox series in cunjuction with Mayweather's birthday bash, but has once again fallen prey to yet another delay. FightNights.com has learned that visa issues have prevented Zambrano from leaving his native Peru in time, as their bout has been pushed back to March 25 at a yet-to-be-announced location.

"We have big plans in store for the fight," Mayweather Promotions CEO Leonard Ellerbe told FightNights.com over the weekend, though stopping well short of revealing the event or network on which it will land.

Meanwhile the show goes on at Pechanga Resort & Casino in Temecula, California. The rest of the card remains intact, with a new main event as Justin DeLoach - who sped up from prospect to contender after taking out three unbeaten super welterweights in a brilliant 2016 campaign - faces Ohio's Chris Pearson in a 10-round crossroads bout.

Two other bouts grace the televised tripleheader as Andrew Tabiti faces Quantis Graves in a cruiserweight clash while Saul Rodriguez puts his unbeaten record on the line versus Oscar Bravo in their lightweight tilt, with both bouts scheduled for 10 rounds. The night will carry a theme throughout the telecast focusing on the 40th birthday celebration of Mayweather, who closed out his brilliant career with a Sept. '15 points win over Andre Berto to go out at 49-0.

There has remained much speculation over whether or not he will return to the ring, although such talks have since shifted to a massive money grab showdown with fellow diva and UFC superstar Conor McGregor. Such talks of his fighting future may or may not be revealed this weekend.

What has already come of the show is yet another broken promise made to Marrero, who questions the validity of his opponent's current visa issues.

"I am not convinced his visa wasn't given," Marrero (21-1, 15KOs) told FightNights.com. "Mayweather Promotions and Zambrano's manager had more than enough time to secure his visa. For God's sake, he's a champion and the best featherweight in (Peru). If anything he's overqualified to gain acceptance.

"I know this because I recently went through the process to achieve permanent residency in the U.S. (Marrero was born and raised in Santo Domingo, Dominican Republic but now lives and trains in Miami, Florida). So they can tell that lie to someone else."

For now, all the 27-year old southpaw can do is hope the latest revelation carries some form of the truth.

"I've been ready for this opportunity for more than three years," said Marrero, referencing his climb back to contention following a points loss to Jesus Cuellar in their Aug. '13 vacant title fight, his lone career loss. "I've been waiting on Zambrano to grab his nuts and take this fight for more than a year. I will not only be ready on March 25, but once that bell rings he's going to catch the beating of a lifetime for putting me through all this bulls**t for the past 14 months. He will pay, and Mayweather Promotions will lose its featherweight champion."