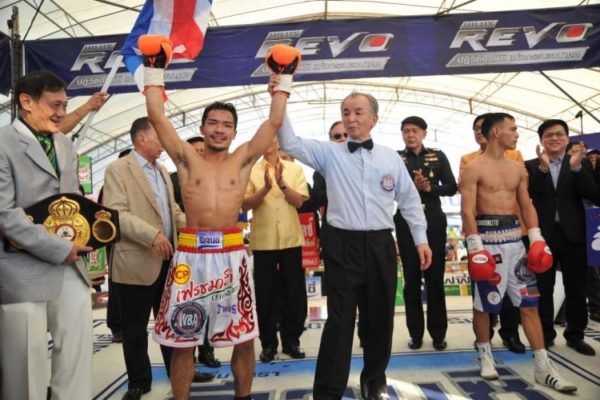 Not even a name change can spare Knockout CP Freshmart from fulfilling his title obligations.

The boxing artist also known as Thammanoon Niyomtrong has been ordered by the World Boxing Association (WBA) to next defend his strawweight title versus mandatory challenger Rey Loreto. Formal notification was sent to representatives for both parties on Monday, with a purse bid hearing scheduled for May 17 in the event that the two sides fail to come to an agreement during its 30-day free negotiations period.

CP Freshmart (15-0, 7KOs) earned an interim title with a 12-round win over Carlos Buitrago in his just ninth pro fight back in Oct.' 14. He made three successful versions of the secondary title - including a more convincing win over Buitrago in their rematch last February - before fighting for and earning the WBA "regular" title with a 12-round win over Byron Rojas in their title consolidation clash last June.

Two defenses of the full version of the title have followed, including a 5th round stoppage of Go Aidara in his most recent ring appearance this past February.

The reasoning for the WBA ordering the fight was due to the fact that - in fighting for the full version last June - CP Freshmart was actually due to satisfy his mandatory defense obligation by no later than March 24.

What's not as neat and clean is how Loreto (23-13, 15KOs) became his mandatory challenger.

The streaking upset specialist from Philippines is currently riding a seven-fight win streak, including wins over former strawweights titlists Pornsawan Porpramook and Nkosinathi Joyi. Loreto outpointed Porpramook in Oct. '13 before going on to scoring a pair of stunning - and early - knockouts over Joyi, both coming in his opponent's native South Africa. His 3rd round stoppage of Joyi in Feb. '14 landed as among the year's biggest upsets, but the word was out by the time they fought again in March '15, this time with Loreto ending matters in just 106 seconds.

Both bouts with Joyi came with the IBO light flyweight title at stake, with Loreto still recognized as the sanctioning body's champion at that weight. He has fought three more times since the aforementioned rematch - all coming just above the junior flyweight limit and with two of the opponents making their respective pro debuts.

Loreto hasn't been classified as a strawweight since 2011, losing three straight bouts at the weight before moving up (and losing his fourth in a row overall upon said move).

For whatever reason, his deserved title shot comes at the lighter weight rather than at junior flyweight where he has resurrected his career.

There stands a chance that the bout will ultimately land in Thailand, where CP Freshmart has spent the entirety of his five-year pro career. The location seems to make as little difference as the fighting weight to Loreto, who last six starts have taken place in five different countries though the majority of his career spent in his native Philippines and Thailand.