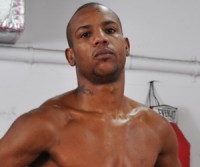 For the year or so that he's been forced to wait for this fight to materialize, Claudio Marrero breathed a sigh of relief when his April 29 title challenge versus Carlos Zambrano came with good news for a change.

The upcoming featherweight title fight was given an upgrade to main event status after Beibut Shumenovn withdrew from his cruiserweight title consolidation clash with Yunier Dorticos due to injury.

"I'm thrilled to showcase my talents in a main event," Marrero (21-1, 15KOs) said of his now headlining attraction, which airs live this Saturday on FS1 from Sams Town Casino in Las Vegas. "I am disappointed for Yunier (who trains with Marrero at Herman Caicedo's complex in Miami) because I know he was ready to knock out Shumenov.

"As for my fight, being the main attraction only makes me want to deliver an even greater performance. I haven't been able to function as a normal person over the past 11-12 months waiting for this fight. Now the time has come to show the world where i belong among the world's best featherweights."

Zambrano (26-0, 10Kos) makes the second defense of his version of the title, but his first fight since Aug. '15. The 32-year old from Peru signed with Mayweather Promotions - the lead promoter for this weekend - but struggled to find his way to a ring due to visa issues among other reasons.

Marrero was forced to play the waiting game, but after two postponements in 2016 decided to take a stay busy fight last summer. The 28-year old Dominican southpaw - Who now lives in trains in Miami - prevailed in a 4th round knockout of countryman Luis Hinojosa in Brooklyn, New York.

It wasn't enough to whet his appetite, however, as this fight is all that has been on his mind.

"It's to where I don't even have a normal night with my family," Marrero explained of his dedication towards his second title challenge. He fell short in an Aug. '13 title bid versus Jesus Cuellar, who has since conceded his crown to Abner Mares.

Marrero has kept winning but won't be pleased until a belt is finally around his waist.

"I'm training even when I'm not. When I'm with my wife and kids at the movies, they're watching the previews while I'm doing 200 push-ups in the aisle waiting for the movie to start. My shower time is spent holding my breath to expand my lungs.

"Even when I go to the bathroom, I squat instead of sit so I can strengthen my legs. I do this because I want to punish (Zambrano) for making me wait all this time for what's mine."