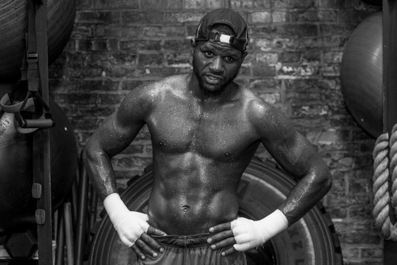 Here is what he had to say:

“It’s always good coming home. This was well deserved. I have a lot of fans and a lot of love and support in Philly. It’s a good chance for them to see me work and perform.”

“Training camp is good. I’ve been in camp with Shawn Porter. I got him ready for the Berto fight. I’ve been just waiting to turn it up and ready to fight.”

“You always got to train a little bit harden when fighting in your hometown. For every fight, I train like it’s a do or die fight.”

“135 is my home. I had to go back and forth because nobody would fight me. A phone call is right around the corner. I will step in as the opponent and shock the world once again.”

“Evangelista like to box. He’s not your typical come forward Mexican. He likes to box. At the end of day, I’ve been in there with every style.”

“I took my little bundle and stick and have went state-to-state and traveled. I’m experienced. I’ve been in there with the best. It’s all business.”

“I want Robert Easter and Terry Flanagan at 135. I heard Easter called me, “Big Bro” but let’s go, let’s get in the ring and show them what brothers do!”

“I’ve been chasing Mikey Garcia for years! I’ve been calling him out for years! Now I hear he’s gonna fight Broner? I’m down at 135, see me!”

“I’ve been calling for the Adrien Broner fight for years! I’m one of the realist. In Cincinnati, AB was trying to clown me. There is no more love. I want to fight him! His camps are easy work! I don’t entertain fake love. They think I’m a soft touch? They want me to come up to 147? Let’s go!”

“I don’t care about Mayweather vs McGregor. That is disrespectful to boxing! Floyd is good money, but I don’t respect it.”