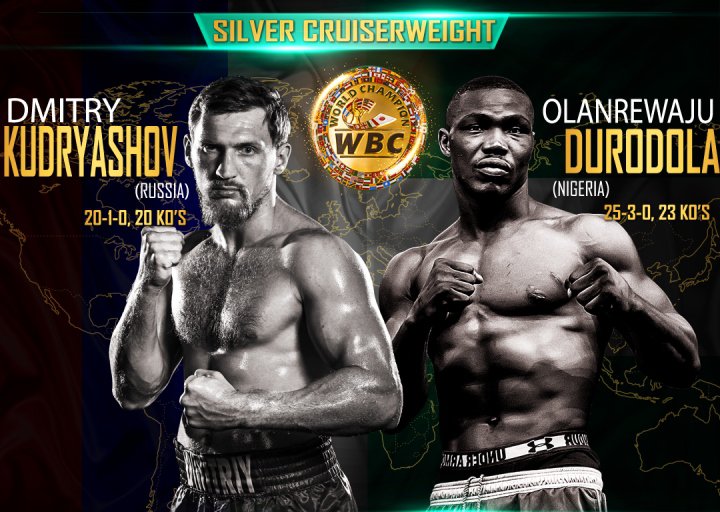 Overcoming a knockout loss can be among the toughest tasks in any boxer's career, never mind avenging one.

Dmitry Kudryashov wasn't always pretty in accomplishing the task, but did just that in stopping Olanrewaju Durodola in the fifth round of their cruiserweight rematch Saturday evening at Sports Palace in Rostov-na-Donu, Russia.

Whereas their first clash was bombs away, Kudryashov at least made the effort to offer a more disciplined approach this time around. His lone career loss came out of carelessness, as he was handily winning their brief first bout before getting caught in round two due to pure recklessness.

Plans to fight with a bit more caution lasted about as long as it took for the local favorite to get clipped with the first power punch of the fight, which came in the form of a pair of left hooks from Durodola moments after the opening bell sounded. Kudryashov did his best to remain disciplined, attempting to establish his jab and keep his opponent at arm's length just long enough to get off his own big shots.

A boxing match just wasn't meant to break out, however. Durodola was hell bent on picking up where he left off, with the Kansas-based Nigerian slamming home left hooks and overhand rights. Kudryashov had his say as well, scoring with right hand shots only to find himself along the ropes and forced to evade an incoming attack from his determined foe.

The first round had to bring back all sorts of bad memories for Kudryashov but the 30-year old slugger did his best to remain composed and seize control of the action. From there, it was as smooth as the situation would allow, with the once-beaten cruiserweight contender winning every round thereafter but sloppy enough to where Durodola always seemed to be one home run shot away from history repeating itself. To his credit, Kudryashov remained wary of the incoming even while winging power shots, never getting clipped with the type of blow that ended their first fight.

Instead, it was the free-swinging Russian who delivered the game-changing shots. Durodola showed a world class for as long as any human should be allowed to absorb the type of punishment unleashed in this five-round slugfest. He was still connecting with bombs before getting clipped with a booming right hand to hit the deck hard in round four. Somehow, he managed to not only peel himself off of the canvas but survive a relentless ensuing attack while seemingly out on his feet.

While Durodola survived a savage round four, the worst was yet to come. His corner sensed it was a matter of time, doing their best to stall by dumping excessive amounts of water off of his body onto the ring apron in between rounds, with time called prior to the start of round five as Durodola's handlers were summoned to wipe up the mess.

Once the bell sounded, Kudryashov simply wiped him out.

A left hook had Durodola in deep trouble in round five, with a follow up hook sending him to the canvas for the second time on the night. Once again, he managed to beat referee Lupe Garcia's count, but was basically out on his feet. Kudryashov followed up with a hard one-two and a left hook to leave Durodola on rubber legs, this time forcing the referee to wave off the contest.

Durodola ends a three-fight win streak with the defeat, but could find himself on the outside looking in while attempting to punch his way back into contention. His previous win over Kudryashov resulted in a title eliminator with Mairis Briedis, going to war for nine rounds before his chin and legs eventually gave in during their brutal war last May.

Briedis went on to capture a cruiserweight title and has recently been revealed as one of three confirmed entrants for the upcoming Word Boxing Super Series tournament being put together by Richard Schaefer and the Sauerland brothers (Kalle and Nisse). There are heavy rumors that all eight cruiserweight slots are in fact filled, as the winner of this bout was believed to claim the final spot. It would make perfect sense as Kudryashov - who has racked up three straight knockout victories since the Nov. '15 disaster - is now the mandatory challenger to Briedis' title as the result of this win.

The best way to secure that title shot is to take his chances in the eight-man cruiserweight bracket. At the very least, he can look into his future knowing that he helped neutralize a significant piece of his boxing past.

Saturday's cruiserweight battle aired live on Boets Fighter TV in Russia and available via stream (legal or otherwise) for boxing fans and media alike elsewhere around the world.