The end of an era: Gonzalez knocked out in four rounds by Rungvisai 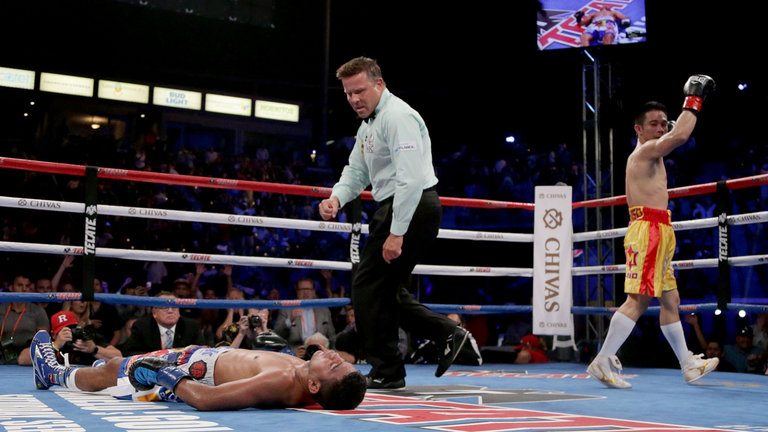 Once a trash collector in Thailand, Srisaket Sor Rungvisai now makes his money by taking out high-caliber boxers. He did just that on Saturday as he scored a stunning one-punch knockout of Roman ‘Chocolatito’ Gonzalez in the fourth round to retain his WBC super flyweight world title before 7,418 at StubHub Center in Carson, California.

The bout was a rematch from their first clash in March, which ended with Rungvisai scoring a controversial majority decision victory over Gonzalez on the undercard of Gennady Golovkin vs. Daniel Jacobs at Madison Square Garden in New York – a fight that most believed Gonzalez had won.

But Sor Rungvisai was awarded the decision, reclaimed the WBC world title that he lost in 2014 to Carlos Cuadras, and took Gonzalez’s undefeated record.

This time, he left no doubt. He knew it was imperative and he executed the game plan to perfection.

“I trained very hard for four months,” Sor Rungvisai stated through an interpreter. “I fought for Thailand, and this is what I dedicate this fight to, Thailand.

“For the first fight, I only trained for two months. For this fight, I trained for four months. I knew I was going to knock him out.”

In the first encounter, Gonzalez (46-2, 38 KO’s) was knocked down with a right hand to the body and was seriously cut by two accidental head-butts, yet still had enough left in the tank to nearly KO Sor Rungvisai (40-4, 40 KO’s) in the final round.

In the rematch, though, Gonzalez appeared shot, and his punches were nowhere close to the ferocity as exemplified in previous fights with Brian Viloria and Edgar Sosa, just to name a few.

Gonzalez was down earlier in the fourth with a huge right hand, but the Nicaraguan took no time to recover and went right back into the fire that put him down. It turned out to be a huge mistake as he was exhausted, gasping for air, and open for another colossal shot. Just moments later, he was staring at the ceiling, with his best days in the ring far behind him.

“We were both trading punches, but his were harder, and they landed harder,” said Gonzalez. “I was very hurt the second time when I was knocked down, but I think I’ll be okay.”

The fact of the matter is Gonzalez was never in the fight. His punches were off, and he appeared more concerned about getting head-butted than mounting offense. This is a sign of a fighter who may have been psychologically impacted from the sheer brutality of the first clash.

He won world titles in four different weight classes, but every fighter has a limit, and Gonzalez tried to bite off more than he could chew.

He was great and dared to be greater. In the end, he became a fan favorite, and is without a doubt a first-ballot Hall of Famer. If this is it for ‘Chocolatito,’ he left us with memories, and that’s all we can ask for.

For Sor Rungvisai, he moves on to bigger and greener pastures. His next bout could be against mandatory challenger Juan Francisco Estrada, who defeated Cuadras on points in a close fight on the undercard.