Canelo, Golovkin Meet Face To Face In L.A. Ahead on May 5 Rematch 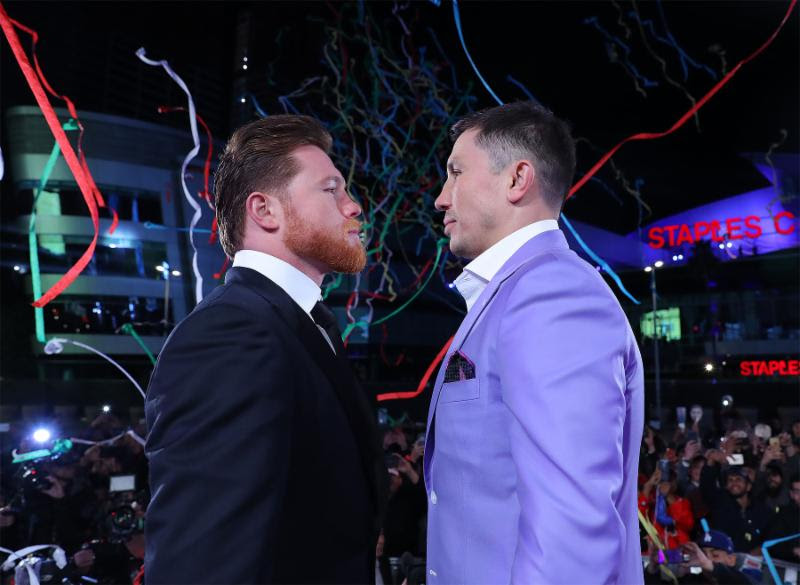 Saul 'Canelo' Alvarez and Gennady Golovkin stood face-to-face in the same room on Tuesday night, the first time they shared the same space since fighting to a controversial draw last September.

The next time they will grace each other with their presence will come during fight week of their highly anticipated May 5 rematch.

A fan even was held in Los Angeles, the only press tour stop scheduled for the two best middleweights in the world heading into their HBO Pay-Per-View superfight sequel at T-Mobile Arena in Las Vegas, Nevada. Thousands gathered outdoors at LA Live's Microsoft Square to catch a glimpse of Alvarez and Golovkin, both decked out in their Sunday best as they sized each other up while also taking time to soak in the vibrant atmosphere.

Moving forward, it's all business.

"I've done my homework. I know what I need to do to win this fight," insists Golovkin (37-0-1, 33KOs), who seeks to make a record-tying 20th defense of at least one middleweight title. "This fight will be even bigger. After the first fight, I felt good. I felt I won the fight and I was comfortable. I've had a lot of time to rest."

Many in the media and attendance felt that Golovkin did enough to emerge victorious in their September 16 clash, also held at T-Mobile Arena which the unbeaten, unified champ from Kazakhstan now refers to as "the scene of the crime." He did enough to earn a 115-113 nod on the scorecard of Dave Moretti, but unfortunately it—and the entertaining bout itself—was overshadowed by the absurd scoring turned in by Adalaide Byrd, whose tally of 118-110 for Alvarez drew cries of corruption or, at the very least, calls for her long overdue retirement.

Judge Don Trella saw the action 114-114, thus rendering the contest a split decision draw. While many believe the night did in fact provide a winner, the disputed ending and high level of action not often found in today's superfights gave both camps a chance to reflect on what went right and—more importantly—what can be done better the second time around.

"I've seen the first fight. I know the changes I must make," acknowledged Alvarez (49-1-2, 34KOs), a former two-division champion who seeks to become a two-time World middleweight champion. "That's going to be the key to victory. It's about adding more things to the preparation.

Perhaps cognizant of his opponent's lofty punching power, Alvarez spent most of the night boxing and employing lateral movement in lieu of standing and trading as most hoped would be the case. It worked to his advantage as far as the official scorecards were concerned, but any criticism coming from their first fight was that it produced a very good fight on a night that could've been truly great.

Alvarez' proposed strategy for the rematch is music to the collective ears of Golovkin's team.

"I hope Canelo [Alvarez] was able to see a transmission specialist for the rematch because in the first fight he was stuck in reverse," quipped Abel Sanchez, Golovkin's longtime trainer. "All I know is that after the first fight the fans were not booing Gennady Golovkin. The rematch took long to make because Canelo takes long to heal and had long memories of the first fight."

Quite the contrary, insists Alvarez' handlers.

"I would have really wished for a rematch against Felix Trinidad," noted Oscar de la Hoya, Alvarez' promoter and whom can draw from personal experience.

The Hall of Fame boxer and former six-division titlist was viewed by many as having been robbed of victory in what became his first career loss, a highly questionable 12-round majority decision defeat to Trinidad in their September 1999 World welterweight championship, in fact 17 years nearly to the day of Alvarez-Golovkin I. What ultimately cost de la Hoya the fight—and his welterweight title—was his misinterpreting the corner advice of then-trainer Gil Clancy to not "get caught (with anything big) but keep him honest."

Instead, de la Hoya strangely spent the final three rounds circling the ring and functionally throwing away the fight. In his mind, the strategy was safe since he believed he was far enough ahead on the scorecards. None of the three judges agreed, but perhaps more regretful was the inability of the two camps to see eye-to-eye on a rematch that never came to pass.

"I would have loved to have knocked [Trinidad] out in the last three rounds instead of boxing," admits de la Hoya, who draws from his own experiences in hopes that Golden Boy Promotions' star attraction takes note in May. "We don't always get rematches of this magnitude, so that's why this fight is special. On May 5, we will get an explosive rematch, and I believe Canelo will knock him out!"

Given the history of Alvarez and Las Vegas judges, a knockout ending is preferred all around.

"Because of the first fight, both guys are at another level. That was a mega fight that delivered in the ring," stated Tom Loeffler, the driving force behind Golovkin's transformation from rising titlist to worldwide box office attraction. "However, Canelo seems to be getting at least one scorecard in the big fights. Maybe it's the red hair, but he's doing something to impress the judges.

The venue, ticket prices and distributing source may all be the same—but the promise is that the in-ring action will not repeat.

"This fight will be different," insists Golovkin. "I don't make predictions, but I know I will give a big show."